By continuing to use the site you agree to our privacy and cookie policy. Accept
Close to the Soil > News Centre > Watercress powers Vitacress to success in Andover Lake Run

Team members from Vitacress were awarded the Andover Advertiser Fittest Company Cup at last weekend’s Andover 10k Lake Run. The award was given as Vitacress was the first company to have five runners cross the finish line. Vitacress Salads’ Tom Grimshaw finished 25th on the day with a fantastic time of 43:03.

The event, which raises money for the Andover Food Bank, attracted thousands of runners and spectators. As well as taking part in the run itself, Vitacress sponsored the event alongside Simplyhealth, and hosted a Wild for Watercress stand where they provided runners and spectators with watercress power shots and information about the health benefits of watercress. 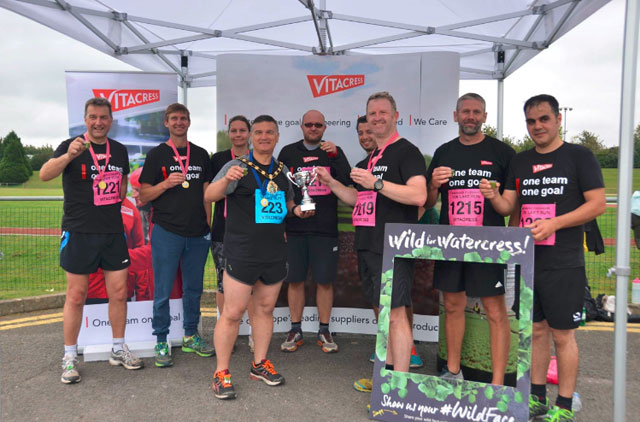 Tony Reid, head of marketing at Vitacress, who also took part in the event and completed the race in a time of 50:23 said: “As a local business, it’s really important to us to be involved in community events. The Andover Lake Run is a fantastic, fun event which raises money for an important cause. I’d like to say a massive thank you to everyone who ran, supported or helped us give out watercress shots. The watercress powers shots certainly helped our team and we’re delighted to have been named as the Andover Advertiser’s Fittest Company too – it was an excellent team performance.”