By continuing to use the site you agree to our privacy and cookie policy. Accept
Close to the Soil > News Centre > Vitacress Scoops Two Awards at UK Grower Awards 2016

Steve is the first person in the UK to have a PhD in the physiology of watercress and has played a major role in establishing watercress as a sought after ‘superfood’. 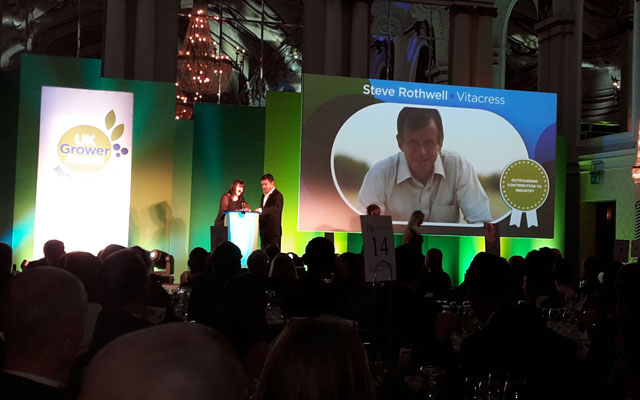 Recognising a need in the market for convenience, Steve introduced the first “washed and ready to eat” baby leaf salad in a bag in 1988 and in 2010 became the namesake for Steve’s Leaves, Vitacress’ own salad brand. Consumer demand for prepared leafy salad now has a category value of over £500M.

The salad producer was also recognised for its introduction of Environment Week, an initiative inspired by Vitacress’ sustainability manager, Leah Mathias-Collins – an initiative to raise awareness of the environment and sustainability to its employees.  This year’s theme was water and focused on its importance as a resource for the business.

During the week, staff took part in a range of events to highlight the significance of water for growing, producing and packing Vitacress products.

Tony Reid, Head of Marketing at Vitacress said: “We are delighted to receive two accolades at the UK Grower Awards.  Steve has been a driving force in growing quality produce to high environmental standards and this honour is testament to Steve’s ongoing dedication to the industry.  To receive the Environment Initiative is also very special to Vitacress.  Sustainability and nurturing the environment are instrumental to everything we do.  So for Leah Mathias-Collins who instigated the Environment Week initiative, to be recognised in this way is certainly something to celebrate.”