By continuing to use the site you agree to our privacy and cookie policy. Accept
Close to the Soil > News Centre > Parsley sales hits record high

It was the obligatory garnish on a plate or a piece of fish, but now parsley has become the fastest growing herb in popularity. Sales of flat leaf parsley are up by 37 per cent this year, to a record level of 14,152,000 packs, pots and bunches, according to Vitacress, the UK’s leading fresh herb producer.

In the past five years, sales of the herb have seen a steady increase year on year, but it is in 2016 that the nation really went parsley mad. The previous year’s increase was 29 per cent and just two per cent between 2013-2014. 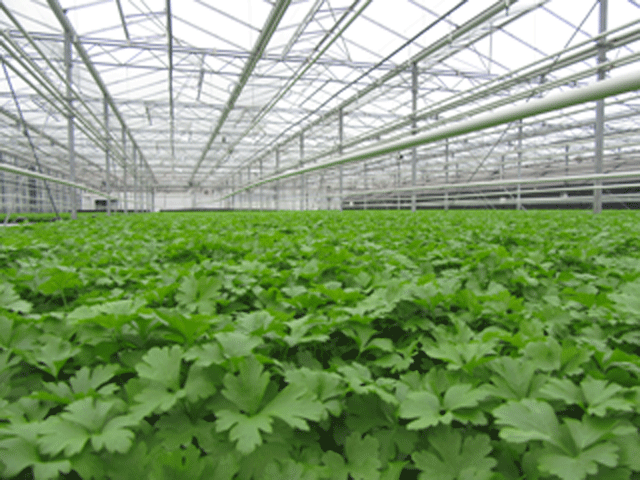 Analysis of ten top bestselling cookery books reveals this is no coincidence with parsley being the most referenced fresh herb after coriander. Big advocates of parsley include Fearne Cotton, who uses the herb in 27 of her recipes in her bestselling ‘Cook Happy, Cook Healthy’ book. The radio presenter, turned cookery book writer, is known to dislike coriander – which is common as coriander is known to be a love or hate it herb-  and uses parsley in place of coriander in many of her Asian style recipes. Food writer Yotam Ottolenghi, known for his Middle Eastern recipes, is also credited with fuelling the nation’s love for parsley.

Simon Conway, managing director of Vitacress Herbs said: “Although herbs have been used in food and medicine for centuries, in the UK it wasn’t really until the 1960s that fresh herbs began to be appreciated for their flavour and since then demand has soared. Parsley was really the first fresh herb to be sold commercially, it was used by fishmongers as a garnish for fish, but it wasn’t until the mid 1990s that fresh parsley began to be sold on its own in the supermarket. Since then we’ve seen a steady increase in demand for parsley, but it is in 2016 that this really spiked. We believe this is down to people wanting to eat more healthily and parsley being an extremely versatile herb that works well in most dishes, from salads to soups. We attribute the overall rise in fresh herb sales to people cooking more from scratch, finding healthy ways to add flavour and becoming more experimental and confident in cooking different types of cuisines.”

Jekka McVicar, herb expert, author and billed ‘queen of herbs’ by Jamie Oliver commented: “Parsley is one of the all-time classic herbs – it’s so great because it brings out the flavour of other foods and herbs. We have Yotam Ottolenghi to thank for really bringing Middle Eastern cuisine into mainstream cooking and parsley is such a key ingredient in those countries. As well as offering a delicious, fresh flavour, parsley is also one of the most nutritious herbs around. It has fantastic digestive properties and has a high vitamin and mineral content. The leaves are high in beta carotene and vitamins A, B, B2, B3, C and E.”

Food writer and author Kerstin Rodgers who writes the award winning blog, Ms Marmite Lover added: “Fresh herbs make all the difference in cooking, they transform the ordinary into the special - adding pep and a verdant sparkle to dishes. Probably the best known herb is parsley which is, according to The Oxford Companion to Food, the most popular herb in European cookery. For years in Britain, we seemed to have only curly parsley, which was used ubiquitously as a garnish - the crinkly leaves tucked in everywhere like moss - rather than for taste. In the last couple of decades, the European flat leaf parsley has gained popularity.”